Bright, crunchy, and colorful, this easy Seven Layer Salad recipe is a fun blast from the past for any party. Make it as-is, just like you remember it, or switch up those layers in a million different delicious ways.

Make a big bowl of original Seven Layer Salad as an easy party side with Wisconsin Beer Brats, Knorr Spinach Dip, and a bucket of Pirate Punch. Yo-ho-ho!

If you’ve never had it, you’re probably scratching your head trying to figure out how it works, what’s in it, and what it will taste like. (It’s really, really good.)

Making Seven Layer Salad for a crowd? All you have to do is click and slide the number next to “servings” on the recipe card below to adjust the ingredients to match how many you’re feeding—the recipe does the math for you, it’s that easy.

How to make Seven Layer Salad:

Before you begin, you should decide on what bowl to use for your layered salad. A clear glass bowl shows off all the hard work you put into chopping the vegetables. And a clear glass bowl with straight sides makes it easy to assemble. 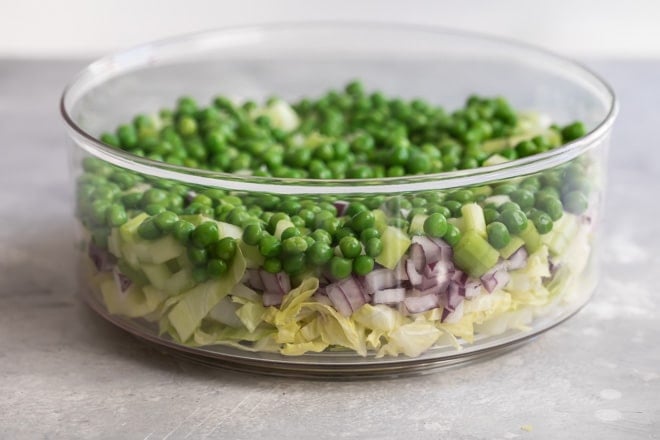 Fifth layer: spread the mayo over everything. Sprinkle with a little sugar. (This is also where the Parmesan cheese comes in, if you’re using it. Mix it into the mayo or sprinkle it on top.)
Sixth layer: grated cheddar cheese.
Seventh layer: crispy chopped bacon.

That’s all there is to it! Cover the salad up with plastic wrap and chill for a at least a couple hours.

A thicker, mayo-heavy dressing is usually the best dressing for Seven layer Salad because it stays on top and doesn’t make the salad soggy. But that doesn’t mean you can’t tweak it a bit!

Here are some great options:

What else can you put in a Seven Layer Salad?

The bowl is the limit, but you can mix up the ingredients as you like. Switch out a few layers, or change it up entirely based on a theme or season. There are absolutely enough ingredients that you could make a different type of Seven Layer Salad that you could eat every day.

How to serve Seven Layer Salad:

Even though you might be tempted to mix the whole thing up, don’t! Serve the salad with a deep spoon and let everyone scoop out what they like. They’ll get enough of everything and it will get mixed up on their plates. Promise!

Hard boiled eggs can be added to make an additional layer in the salad.

Calories: 197kcal
Tried this Recipe? Pin it for Later!Mention @CulinaryHill or tag #CulinaryHill! 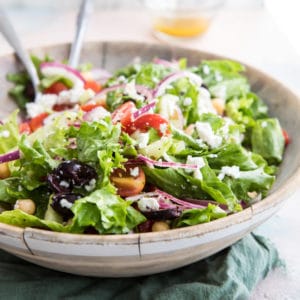