Once you bring home that bacon, don’t just fry it up in a pan—you have options! Learn how to fry bacon in the oven, which leaves you with a sparkling clean kitchen. That means more bacon, more often, for everyone!

If you don’t already know it, cooking bacon in the oven is quite possibly the best thing you’ll learn all year. And yes, even if you’re a diehard cast iron user, you can cook bacon in the oven in your favorite #10. But chances are you’ll be so impressed with how much more bacon fits on a sheet tray than in a pan, that once you try it, you’ll never go back to anything else.

Of course, if you’re only cooking a small amount of bacon for a recipe that makes use of the bacon fat, such as Hot Bacon Dressing or Green Beans with Bacon, it definitely makes more sense to use a skillet on the stove. Same goes for Spaghetti Carbonara…do it in the pan on the stove. Keep on keeping on!

But when you need a whole lotta bacon, turkey bacon, or even facon (that’s veggie bacon), the oven keeps the temperature even, the mess contained, the burns to a minimum, and the hungry bellies fed.

The advantages to frying bacon in the oven:

Are there any disadvantages to cooking bacon in the oven?

Not really. Oven-roasted bacon may take a few minutes longer, but by a few I mean 4 to 5 minutes, tops.

How to fry bacon:

The most important thing you need to cook bacon in the oven (other than bacon) is a rimmed baking sheet.

You can line the sheet with foil or parchment, if you like, for easy clean-up. I personally like to cook the bacon on a rack, but you don’t have to use one. The bacon cooks beautifully in the drippings and stays tender, too.

Got extra bacon fat in the pan? Save it for the Hot Bacon Dressing, or fry up some eggs, quick!

Can you cook bacon in a frying pan?

Of course you can! Using the stove to cook just a small amount of bacon makes sense.

A good tip: starting the bacon in a cold pan helps render the fat better, resulting in crispier bacon.

What temperature to cook bacon?

400 degrees. This temperature isn’t set in stone, though.

For example, if you’re baking, say, a Cheesy Potato Casserole, you will already have the oven set to 350 degrees. That’s perfectly fine. It might take a tiny bit longer to cook the bacon, depending on how crisp you like it, but it will still work great.

How long to fry bacon?

That is up to you and how you like your bacon. Since most bacon is already cured, there is no hard and fast rule about cooking times—most of it is eyeballed. How do you know when bacon is done? Look at it. It should be browned, crisp, and tantalizingly juicy. 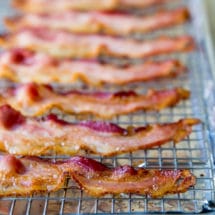 How to Fry Bacon

Once you bring home that bacon, don’t just fry it up in a pan—you have options! Learn how to fry bacon in the oven, which leaves you with a sparkling clean kitchen. That means more bacon, more often, for everyone!
Author: Meggan Hill
5 from 9 votes
ReviewPrint
Cook Time 10 mins
Total Time 10 mins
Servings 8 (2 slices each)
Course Breakfast
Cuisine American
Calories 267

To fry bacon in the oven:

To fry bacon on the stove:

Calories: 267kcalCarbohydrates: 1gProtein: 19gFat: 20gSaturated Fat: 7gCholesterol: 56mgSodium: 974mgPotassium: 286mgVitamin A: 21IUCalcium: 7mgIron: 1mg
Did you make this recipe?Tag @culinaryhill on Instagram so we can admire your masterpiece! #culinaryhill 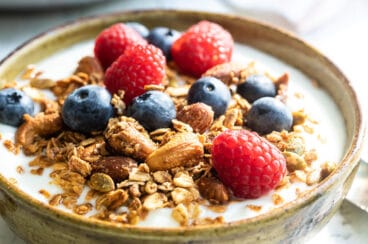 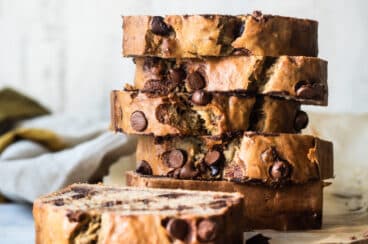 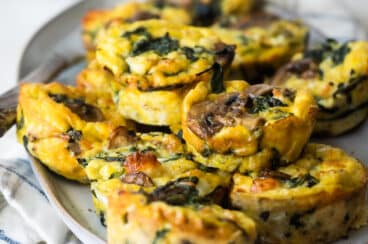 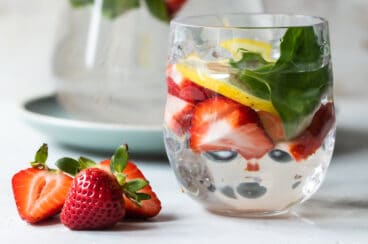