An easy recipe for Tater Tot Casserole, from scratch! Mix ground beef and green beans with creamy homemade soup (made with milk, not cream!), top with frozen hash browns, and bake to crispy, golden perfection.

Where I come from, Tater Tot Casserole is simply known as “hotdish.”

However, the term is not mutually exclusive to Tater Tot Casserole. Hotdish is any casserole that includes meat, a starch, a canned vegetable, and canned soup all in one.

I like to revise the classics so they taste even better than you remember, so my Tater Tot Casserole has homemade cream of soup (made with milk, not cream) and frozen veggies instead of canned.

But, let’s keep the frozen tater tots. Modern food science has yet to improve on those!

How do you make Tater Tot Casserole?

Because the soup is made from scratch, not from a can, make that first.

Sauté mushrooms in butter until softened, then stir in chicken broth and spices. Finally, thicken the soup with a combination of milk and flour.

Meanwhile, brown beef, onions, and celery. Drain the grease, then stir in the soup and green beans.

Note: Frozen at the peak of taste and freshness, frozen vegetables are the most nutritious choice you can make unless you are growing the vegetables yourself or getting them straight off a farm the same day they are picked.

Pour everything into a casserole dish, top with frozen taters, and pop it in the oven.

How long do you cook a Tater Tot Casserole for?

Bake the casserole in a 375-degree oven for 40 to 50 minutes, until the tater tots are cooked through and crispy.

How do you make a Cowboy Casserole?

Cowboy Casserole is very similar to Tater Tot Casserole. However, you add corn instead of green beans. It also has cheese and sour cream.

Can you use Cream of Chicken soup instead of Cream of Mushroom?

Yes, absolutely! I have a recipe of Condensed Cream of Chicken Soup which you can swap out from the mushroom version above, if you’d like. Just thicken the sauce with milk as necessary.

For the mushroom sauce:

To make the mushroom sauce:

To make the casserole: 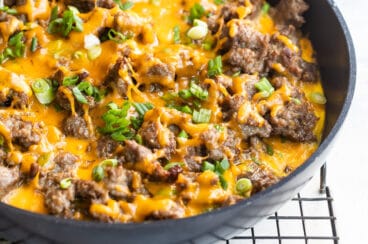 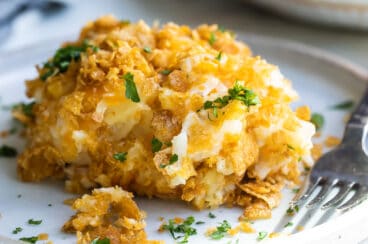 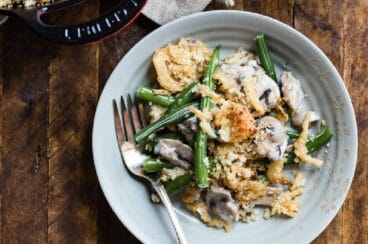