This isn’t a boozy strawberry slushy out of a machine; the Hemingway Daiquiri is as crisp and cool as it gets, made with rum, lime, and grapefruit– shaken until icy.

Easy rum drinks don’t get any more delicious than this Daiquiri. Created in Havana for Ernest Hemingway in the 1920s, it was quite possibly your great-great-grandmother’s favorite cocktail; now it can be yours. After all, it’s 5 o’clock somewhere! 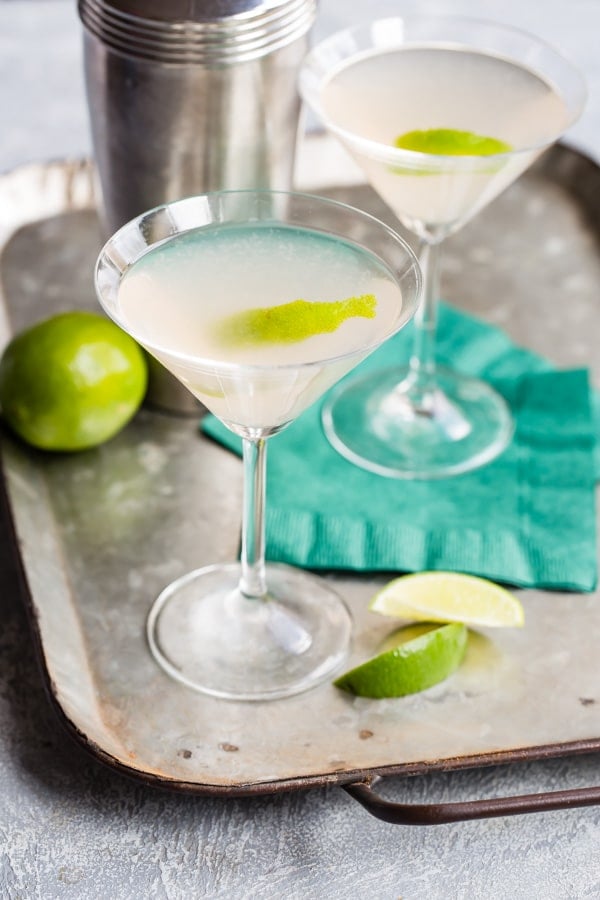 Making a big batch of cocktails for Happy Hour? Click and slide the number next to “servings” on the recipe card below to adjust the ingredients to match how many you’re serving—the recipe does the math for you, it’s that easy.

What is a Daiquiri?

Simply put, a Daiquiri is a any cocktail made with rum and lime juice. Some people only know it as a frozen Daiquiri, (think Peach Daiquiri, Strawberry Daiquiri) but that’s not the recipe that I’m talking about here—I just don’t have the room for one of those machines in my kitchen!

Even though the Hemingway Daiquiri isn’t technically frozen, it’s still shaken with ice so vigorously that after it’s strained out into the glass, little crystals float on the top, making each sip as delightful as a breeze off the ocean.

Of all the Daiquiri recipes out there, I like this one the best. It’s sweet, but not overly so, and uses a little grapefruit juice in addition to fresh lime with the rum. But the most unique aspect of this cocktail is the maraschino liqueur, which adds depth and—dare I say?—a little intrigue to the mix.

Just the way Hemingway would want it.

What is the Hemingway Daiquiri history?

I think it’s safe to say that Ernest “Papa” Hemingway was one of the most illustrious authors of the twentieth century. While in Florida and Cuba, he liked to imbibe—a lot. “I drink to make other people more interesting,” he wrote, and so…to stay interested, he had a number of favorite cocktails at all his regular haunts.

La Floridita, a Havana bar frequented by Hemingway in the 1920s, created the original doctored-up Daiquiris, made with maraschino liqueur instead of simple syrup. The bartenders would blend the drink with ice, then strain it out into a glass. He often bragged about drinking (gulp) a dozen of them at one sitting.

When tourists would come in and order one of his customary drinks, the bartenders made the Hemingway Daiquiri, also known as El Floridita, a tad less potent and a tiny bit sweeter.

And that’s the version we’re serving up here. After all, you still want to be able to sit up and have an interesting conversation, right? Right. 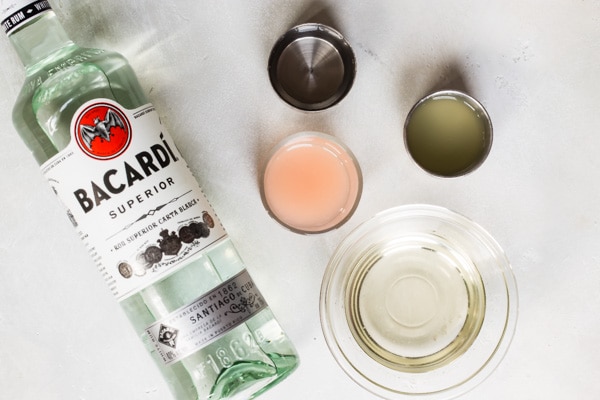 What is maraschino liqueur?

Don’t worry! It’s definitely not the sugary syrup that cherries are soaking in. And it’s not red.

Maraschino liqueur has a bitter, sweet, and somewhat nutty flavor that comes from Marasca cherries—grown in Northern Italy and Croatia—that have been crushed with the pits and then soaked in neutral spirits. The pits contribute to the nuttiness; in fact, it’s difficult to taste any cherry flavor at all.

Maraschino liqueur was a very common ingredient in cocktails from the late nineteenth and early twentieth centuries. Luxardo and Maraska are two excellent choices, and they’re available in well-stocked liquor stores.

Buy a bottle and then explore other vintage drink recipes. It’ll be fun, educational, and delicious.

What can you substitute for Maraschino liqueur?

Unfortunately, there is no exact substitute. Kirsch has a similar flavor profile, but it is drier, without any sweetness. Cherry Heering is fruitier, but much, much sweeter than Maraschino liqueur. For some uses, Amaretto can be substituted, though this liqueur, too, is very sweet.

If you have some Kirsch left over from making my Black Forest Cake, maybe use it instead and add a little more simple syrup…let me know. But if you’re determined to make this drink as it was intended, please find the Luxardo.

What kind of glass to you serve a Hemingway Daiquiri in?

It is fabled that ‘Papa’ drank his in much larger, vase-sized glasses, but to be civilized, look for a coupe champagne glass like this one. The ice crystals float on the surface of the drink and taste amazing.

If you have the patience, second hand shops might be your best bet to find coupes in a variety of styles.

And if you need a cocktail shaker, look no further than this practical set, which shakes up my Hemingway Daiquiris like a professional. 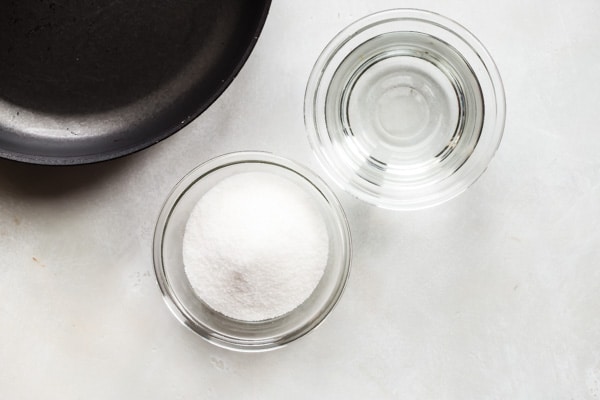 How to you make simple syrup?

Making simple syrup is a snap.

To make simple syrup, combine equal parts sugar and water together over medium-low heat in a saucepan. 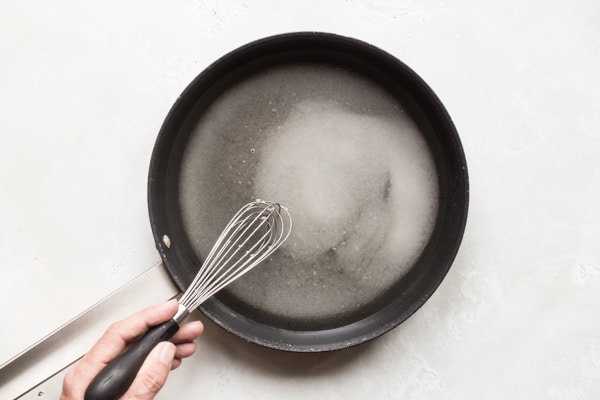 Stir until dissolved, then allow to cool before using. 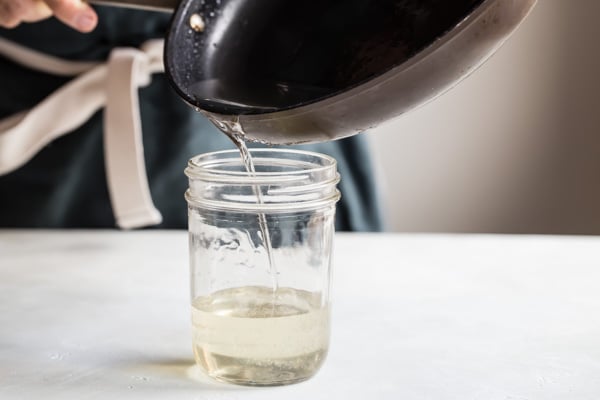 You can keep leftover simple syrup in an airtight container in the refrigerator for up to 3-4 weeks. Now you’re ready to shake. Cheers! 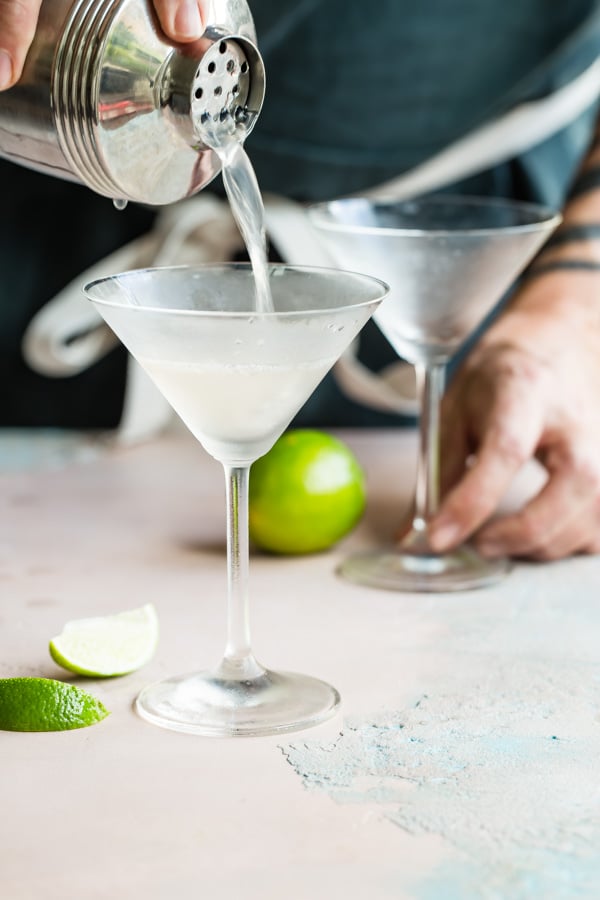 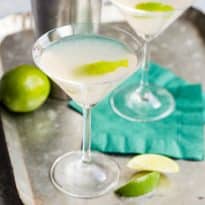 This isn’t a boozy strawberry slushy out of a machine; the Hemingway Daiquiri is as crisp and cool as it gets, made with rum, lime, and grapefruit-- shaken until icy.
0 from 0 votes
ReviewPin0Print
Prep Time 3 mins
Total Time 3 mins
Servings 1 cocktail
Course Drinks
Cuisine American
Calories 184

To make simple syrup, combine equal parts sugar and water together over medium-low heat in a saucepan. Stir until dissolved, then allow to cool before using. You can keep leftover simple syrup in an airtight container in the refrigerator for up to 3-4 weeks. 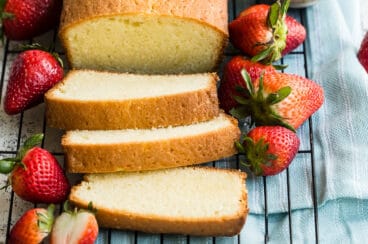 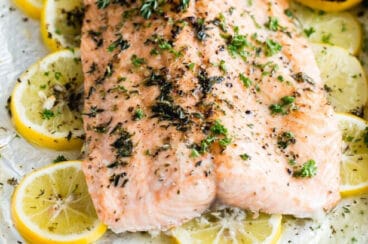 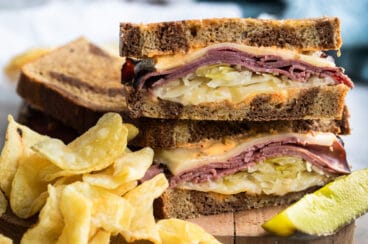 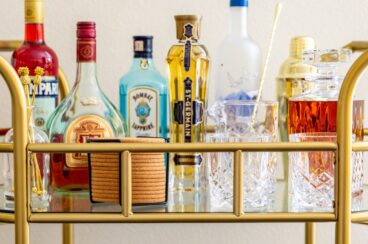 How to Stock a Bar Cart