Summer nights are even sweeter with a warm Cherry Crisp for dessert. Throw it all together at the last minute and serve it up with some vanilla ice cream. This recipe for Cherry Crisp is easy—no, easier— than pie! If you’ve been making cherry crisp with cake mix, this recipe is just as simple and far better. All you need is butter, flour, rolled oats, a little salt, and cinnamon. That’s all there is to it.

Now let’s discuss cherries. That’s completely up to you: sour cherries, sweet cherries, frozen or fresh. One version of this cherry crisp uses pie filling—homemade pie filling— which just might change your life. But if you’re short on time, you can skip that and make the version with fresh cherries.

There’s also a version for cherry crisp without oats, for all the crumble lovers out there.

In other words, you officially have no excuse not to revel in as many cherries as possible, all summer long.

Need Cherry Crisp for a crowd, or just cherry crisp for two? Click and slide the number next to “servings” on the recipe card below to adjust the ingredients to match how many you’re feeding—the recipe does the math for you, it’s that easy.

How to make Cherry Crisp with cherry pie filling:

If you’ve already made homemade Cherry Pie Filling, which is a simmered and thickened preserve of fresh cherries and sugar, you’re already well on your way. If you haven’t, you can make an impromptu version from fresh or frozen cherries (see the next section for an easy recipe).

Let the crisp cool for a few minutes before eating; you don’t want to burn your mouth!

How to make Cherry Crisp with fresh or frozen cherries:

If you have no time for making cherry pie filling beforehand and just want to get to work in making the best cherry crisp ever, here’s how.

If the crisp starts to brown too quickly, loosely cover it with aluminum foil and continue baking until bubbly.

How to make Cherry Crisp without oats:

Technically, a cherry crisp without oats is considered a cherry crumble. It doesn’t matter what you call it, though—both are fantastic, easy desserts that go great with a scoop of vanilla bean ice cream.

In place of the oats, use the same amount of all-purpose flour, gluten-free flour, or almond flour. That’s it! How to make a Cherry Crisp without flour:

Depending on whether you’re looking for a recipe for a gluten-free cherry crisp or just a crisp with a higher oats-to-flour ratio, here’s what to do:
For a crispy crunchy oatmeal crisp, switch out the flour for almond meal and keep the rolled oats as-is.

For a completely gluten-free Cherry Crisp, make sure the rolled oats are made in a facility that doesn’t also process wheat. (Bob’s Red Mill makes rolled oats that are strictly gluten-free.) Then switch out the small amount of flour for your favorite gluten-free flour blend.

How to store Cherry Crisp:

If for some strange reason you have leftovers, loosely cover the crisp with foil or plastic wrap and leave out at room temperature overnight, so you can have it for breakfast.

Refrigerate if you aren’t able to eat it all; it will keep for up to a week. How to make Cherry Crisp in advance:

Ideally, Cherry Crisp is at its best when served fresh from the oven, but here’s a great trick for making fruit crisps ahead of time, ensuring crispy toppings without any sogginess or sinking crumbles.

By the way, this method applies to any kind of fruit crisp. It’s a time-tested secret professional kitchens and restaurants use when making fruit desserts.

The cherries warm up, the crisp magically gets crispier, and all of a sudden, you have one beautiful homemade dessert.

Summer nights are even sweeter with a warm Cherry Crisp for dessert. Throw it all together at the last minute and serve it up with some vanilla ice cream.
Course Dessert
Cuisine American
Keyword cherry, oatmeal
Prep Time 5 minutes
Cook Time 40 minutes
Total Time 45 minutes
Servings 8 servings
Calories 380kcal

To use fresh or frozen cherries, use the following recipe in place of cherry pie filling: Ingredients: Directions: 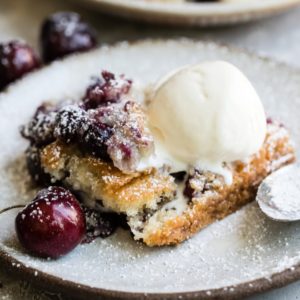 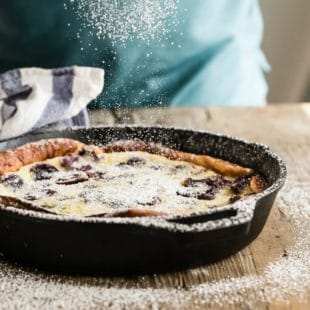 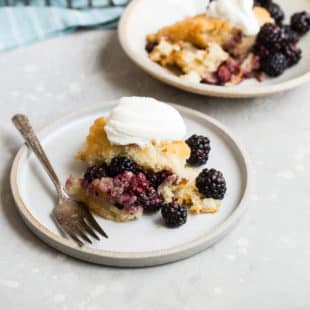 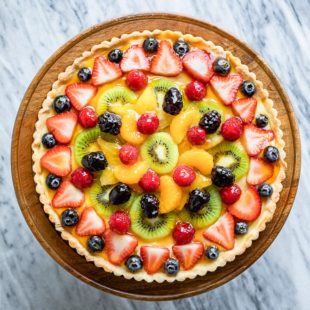 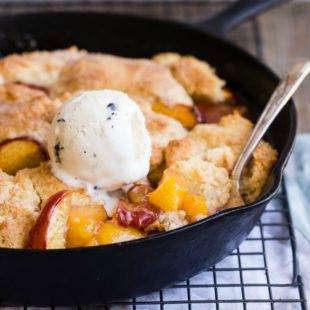