Home / How To / Working with Fruits and Vegetables

How to Cut Corn

No ratings yet
Leave a ReviewJump to Recipe

If you’re finding corn kernels in hard to reach places all over your kitchen, it may be time to figure out a better way to handle summertime’s favorite vegetable. Here’s how to cut corn off the cob as neatly and efficiently as possible.

Corn makes everything better. From roast corn chowder, a corn salsa to end all other corn salsas, or a warm corn salad like Esquites (Mexican Corn Salad), corn gives sweetness and crunch to every golden bite. For those who love it whole, Corn on the Cob 4 Ways shows you how to cook it, no matter what you have. 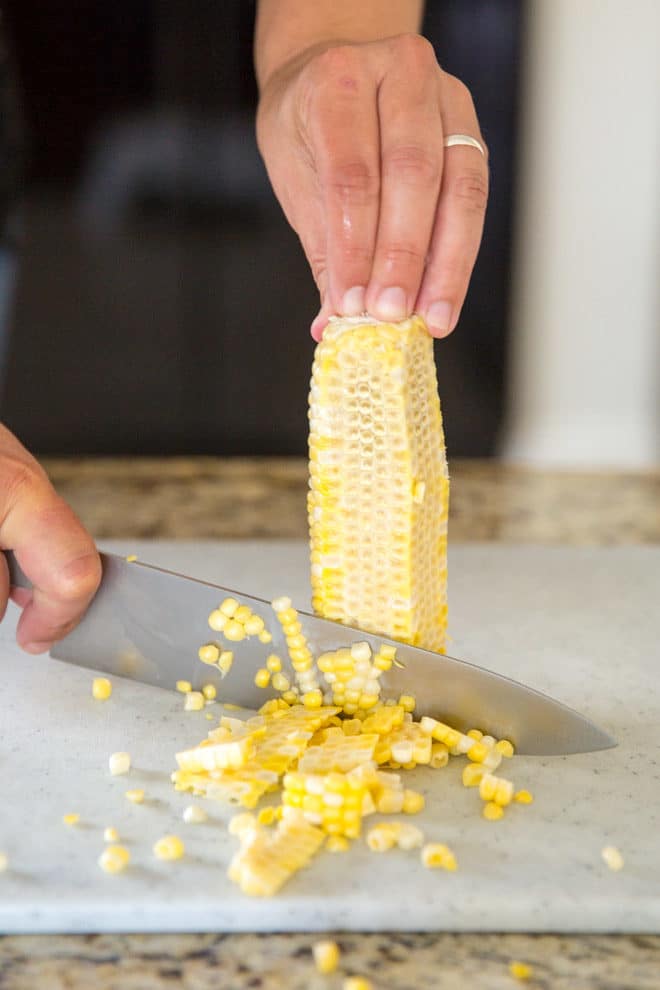 One thing corn isn’t, however, is tidy. From shucking to eating and everything in between, corn can squirt, drip, pop, and fly about, ruining a clean workspace and sending kernels everywhere, only to be found much later.

So, how about a couple genius, easy to remember “corn hacks” for removing kernels from an ear of corn? With summer in full swing, they just might come in handy.

Making corn off the cob for an army, or does it just seem that way? Click and slide the number next to “servings” on the recipe card below to adjust the ingredients to match how many you’re feeding—the recipe does the math for you, it’s that easy.

How to cut corn off the cob:

This easy method works for raw or cooked corn, whichever you prefer. You don’t have to cook corn before cutting it. (Although if you do, you might want to use silicone gloves for handing hot ears fresh off the grill.)

Before you begin, make sure the corn is shucked.

Find a cutting board that fits inside a rimmed baking sheet or baking dish. Place the board inside the baking sheet. The rim should help corral the little flyaway kernels that try to escape. Then place the shucked cob, flatter side down, standing up on the cutting board. 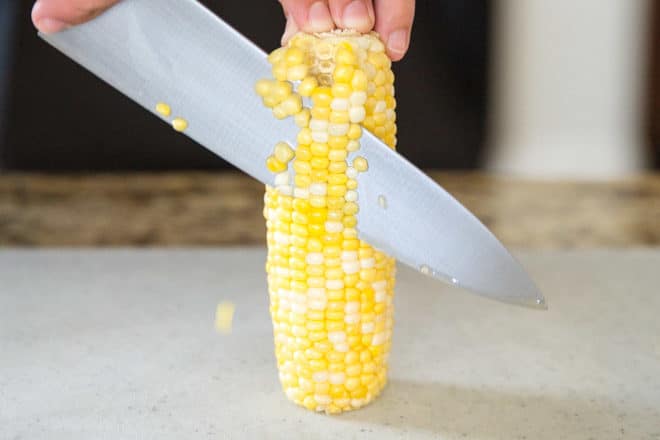 Place a tube pan on a flat work surface on top of a damp kitchen towel so the pan doesn’t slide as you work. Position the corn cob flatter side down, standing on top of the tube in the middle of the pan. 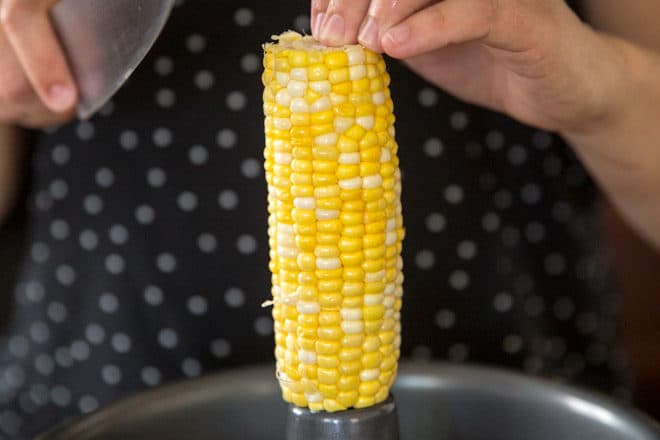 Once you pick your favorite set-up, you’re ready to go. Using a chef’s knife, carefully slice along the length of the ear between the kernels and cob. Try to get as much of the kernel as you can, but don’t cut too close to the cob or you’ll have tough bits on the ends of the kernels.

Rotate the cob to get to the next section and repeat until all the kernels are cut. 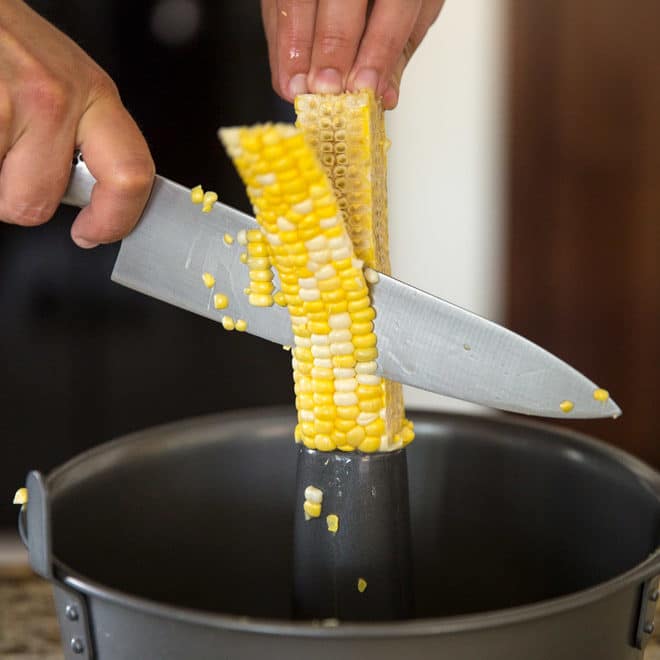 How to shuck corn:

It doesn’t have to be a pain in the neck! Find a comfy place and grab a paper sack for the husks.

How to cut corn in half:

Sometimes, half ears of corn fit better in a big pot! Or maybe you bought 10 ears of corn for a dinner party, but two extra people are showing up…just cut those babies in half and voilà, you have corn for everyone.

No sharp cleaver or chef’s knife needed. Simply shuck the ear of corn and hold one end of the cob in each hand. Then snap the ear right in half–works like a charm, and way easier than you might think.

Can I cut corn off cob before cooking?

If you’re going to make a stir-fry or a roasted corn dish that is cooked in a skillet, you can absolutely cut the corn off the cob before cooking it. Be careful though! As corn cooks, it can pop out of the pan and you’re back to square one in the mess department. A fry splatter screen can come in handy to keep everything contained.

How to freeze corn:

Removing corn kernels from the cob is a fantastic way to prep summer corn to enjoy later. The next time you see a good deal on fresh corn, buy extra to cut off the cob and store in freezer bags for adding to soups, stews, pot pies, and hearty winter meals. A bag of frozen corn takes up less space than frozen whole corn on the cob. And frozen corn recipes are a wonderful reminder that summer is right around the corner.

Stored in a zip-top freezer bag, frozen corn should last up to 12 months. 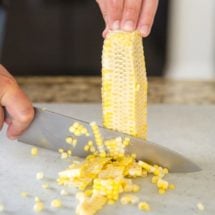 How to Cut Corn

If you're finding corn kernels in hard to reach places all over your kitchen, it may be time to figure out a better way to handle summertime's favorite vegetable. Here's how to cut corn off the cob as neatly and efficiently as possible.
No ratings yet
ReviewPrint
Prep Time 1 min
Cook Time 4 mins
Total Time 5 mins
Servings 4
Course Pantry
Cuisine American

Tried this Recipe? Pin it for Later!Mention @CulinaryHill or tag #CulinaryHill! 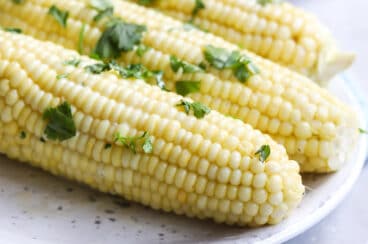 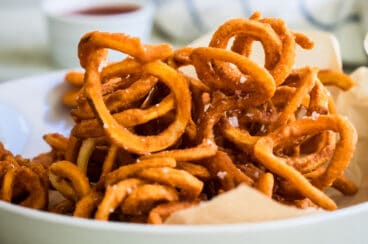 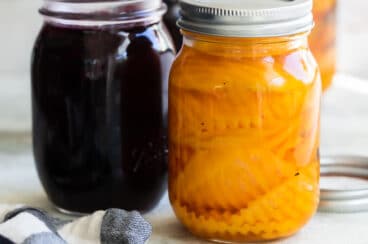 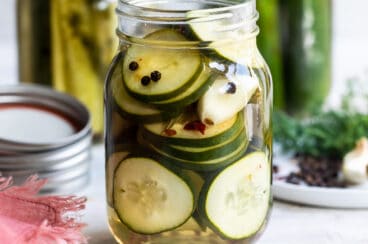