Today I’ll let you in on a California secret: The humble tri-tip. Part steak, part roast, and totally, absolutely, 100% delicious. This little-known cut of meat that’s sure to be the next big thing at your summer barbecues. Most of all, this might be the best, easiest tri tip recipe out there.

Because this cut isn’t always the easiest to find outside of California, it pays to have a good butcher who can cut one for you. Beyond a doubt they’ll be impressed that you’re asking, and maybe even a little jealous that they’re not invited to dinner.

In my opinion, the tri-tip steak is the gift that keeps on giving. It’s tender, juicy, super flavorful, and any leftovers can be sliced up into sandwiches or tacos the next day. 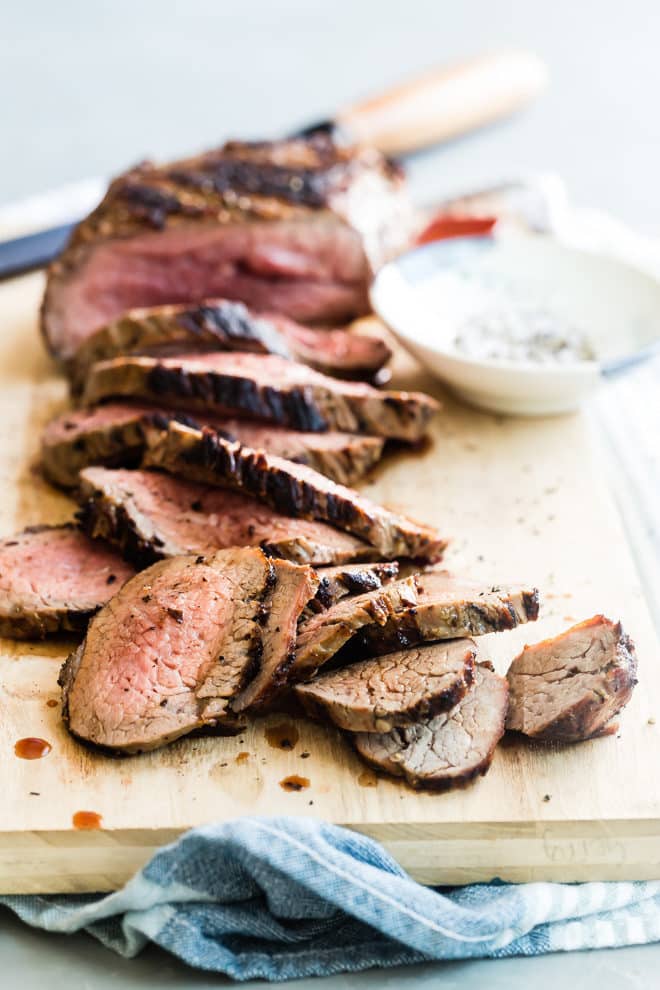 What is a Tri Tip?

Like most celebrities, the famous tri-tip has many nicknames: triangle tip, triangle steak, triangle roast, bottom sirloin steak, just to name a few.

16In the West, it’s often called Santa Maria steak, because this meaty, delicious roast plays a starring role in California regional food, especially Santa Maria barbecue. Out East, however, it’s known as a Newport steak. No matter what its name, it’s a fabulous cut that’s worth searching out.

What cut of beef is a Tri-Tip?

If you’re not familiar with it, the tri-tip is a small, boneless, triangular cut from the sirloin. It usually weighs about 1 1/2-2 pounds. It resembles a thick, slightly lopsided boomerang that is laced throughout with just the right amount of marbled fat. Even though it’s a lean cut, the marbling contributes to its flavor and tenderness.

What’s the difference between a Tri-Tip, flank steak, and a brisket?

While all of these cuts are delicious, they have their differences.  A tri-tip is part of the sirloin, near the bottom by the hip. However, a brisket is a giant cut, ranging in size from 12-20 pounds, from the breast area. Most people know it and love it, but it’s an enormous cut with a looser grain and much more marbling.

In contrast, flank steak comes from the lower abdomen. Although it’s very lean it isn’t as tender as tri-tip, so it benefits from marinating and shouldn’t be overcooked. 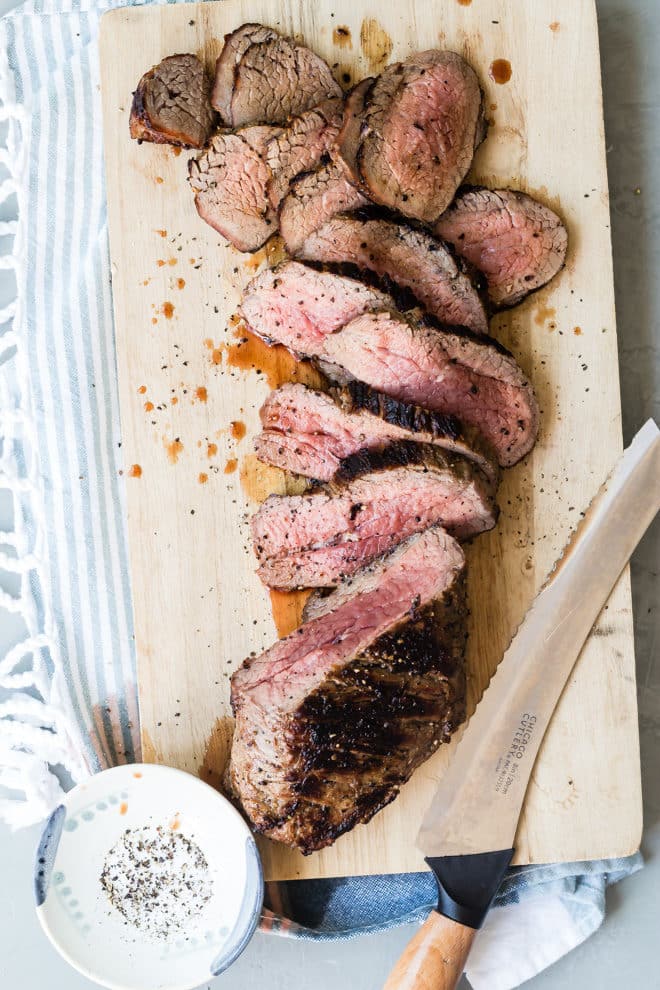 What is Santa Maria Barbecue?

If you’ve never had it, it’s California cuisine at its best! First, the tri-tip is covered with a dry rub and cooked over a fire made of red oak wood. Then it’s served up in juicy, medium rare slices with pinquito beans, a green salad, garlic bread, and salsa. At last, crusty bread is used to soak up the drippings.

Can you cook a Tri-Tip steak without a grill?

Even though my favorite way to make tri-tip in over the coals, if it’s pouring outside, don’t let a rainy day spoil your tri-tip fun. There are other ways to cook this tri tip recipe.

Cooking a tri-tip in the oven:

If you’d like to use an oven, roasting at high-heat works well for this compact meat.

Cooking a tri-tip in an Instant Pot:

Although I don’t necessarily recommend this cut for a tri-tip, some people want a fall apart tender roast rather than a medium rare steak. If that’s you, here’s how to do it: 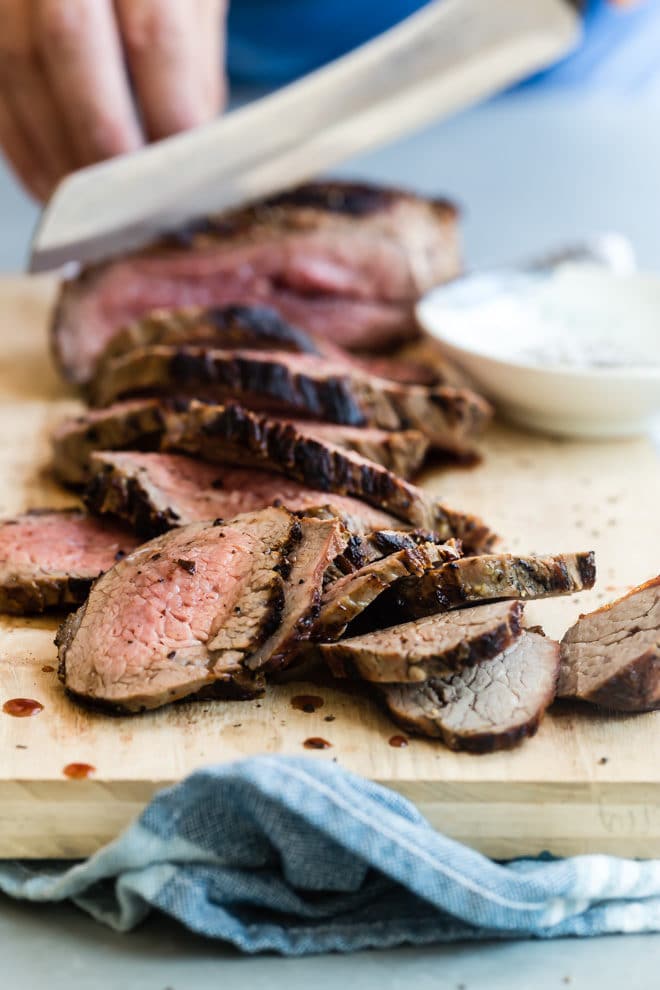 How do you cut a Tri-Tip?

When carving, the trick is to carve the tri-tip against the grain, which can change directions in this cut. To solve this, I recommend slicing the roast in two at the place where the fibers change direction, then carve each piece separately.

How do you season a Tri-Tip?

To keep things simple, my recipe is a paste made of olive oil, garlic, salt and black pepper, but any boldly flavored dry rub will also be excellent.

What side dishes work well with a Tri-Tip?

Since you’re serving slices of this great cut of steak, the sky is the limit when it comes to sides. If you need suggestions, try my Slow Cooker Calico Beans or maybe Orzo Pasta Salad with Roasted Vegetables. I also love potato salad and grilled corn! More than anything, any leftovers make righteous sandwiches on crusty bread, too! 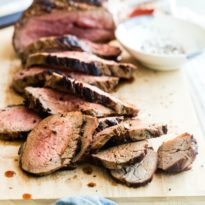 Today I'll let you in on a California secret: The humble tri-tip. Part steak, part roast, and totally, absolutely, 100% delicious. This little-known cut of meat that’s sure to be the next big thing at your summer barbecues. Most of all, this might be the best, easiest tri tip recipe out there.
5 from 5 votes
ReviewPin0Print
Cook Time 40 mins
Marinading time 1 hr
Total Time 40 mins
Servings 6
Course Main Course
Cuisine American
Calories 150

Calories: 150kcal
Tried this Recipe? Pin it for Later!Mention @CulinaryHill or tag #CulinaryHill! 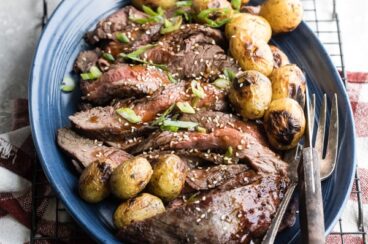 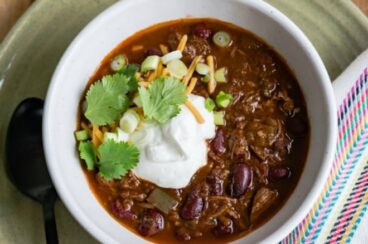