Crunchy on the outside, with a delicately sweet and creamy center, this recipe for Mock Italian Cannoli with Pizzelle cookies is nothing short of heavenly. Your Sicilian grandmother would approve. 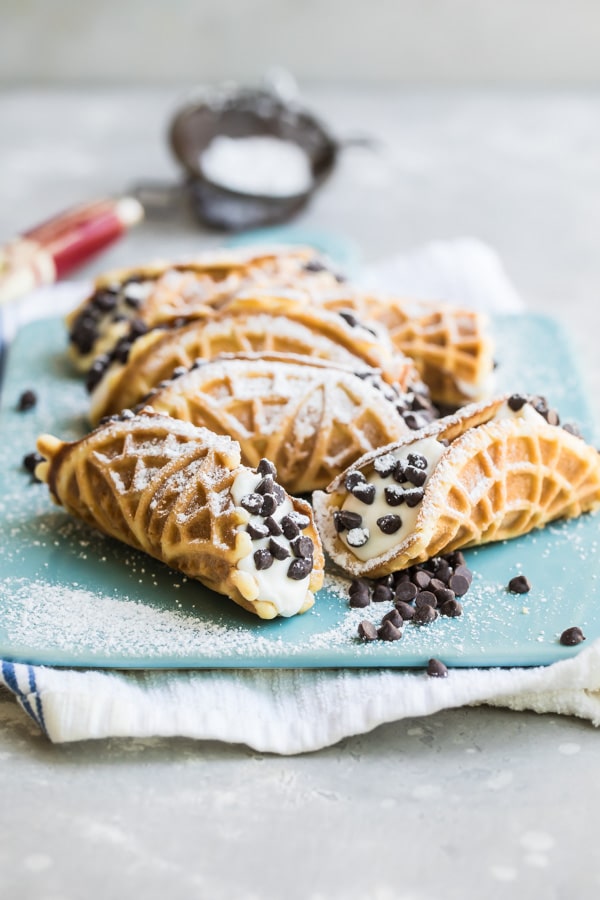 If you have an Italian pizzelle press, you definitely want to memorize this recipe, especially if you dream about Italian cannoli and are constantly looking for cannoli shops nearby. Make a batch of Mock Cannoli with Pizzelle and Vanilla Ricotta Cream, and make all your dreams come true.

This cannoli recipe uses rolled up pizzelle—the flat, waffle-like cookies that are cooked in a press similar to a waffle iron—as a crispy shell for the cannoli. Traditional cannoli shells are made from deep-fried pastry dough; this clever substitute is lighter and far easier.

In case you’re wondering, “cannolo” is the singular form of cannoli, yet everyone calls cannoli “cannoli,” no matter the quantity.

It makes sense, though, because it’s not like anyone can eat just one of these beautiful little ricotta-filled pastries and then…stop. Unless it was the last cannolo in the box, and well, that’s just cause for an argument.

Making a Click and slide the number next to “servings” on the recipe card below to adjust the ingredients to match how many you’re feeding—the recipe does the math for you, it’s that easy.

How to make Mock Cannoli:

Is this recipe truly authentic cannoli Siciliani? Maybe not entirely, but it’s worlds easier and yields just as delightful a dessert as the real thing.

By the way, this how-to is broken up into a couple of different sections, the pizzelle waffle cookie, and the sweet ricotta cheese filling, so you don’t get overwhelmed.

How to make the Pizzelle:

For these cookies, you’ll need a pizzelle press, also known as a pizzelle iron or a pizzelle maker. Nowadays, most pizzelle presses are electric, made of non-stick material for rapid cookie production. But others are manual, which need to be heated on the stove.

Depending on the investment you want to make, there are lots of good options out there for every budget.

To make the pizzelle cookies, you make an easy batter out of melted butter, flour, sugar, eggs, vanilla, and baking powder. (The exact pizzelle recipe is down below, in the recipe card, in case you want specifics—this is just a walkthrough for the readers!)

Some Italian cooks add a pinch of powdered anise to their pizzelle recipe; anise would taste fabulous with cannoli.

How to make Cannoli filling:

What kind of cheese goes in cannoli filling? Traditional cannoli filling is made with sweetened ricotta cheese which is sometimes delicately scented with Amaretto or Sambuca. Some cooks also add a creamy mascarpone cheese for extra body.

The ends of the cannoli are then dipped in chopped pistachios, chocolate chips, chocolate shavings, or toasted almonds. Something sweet to give this creamy pastry a little crunch.

However, this recipe lightens it up a little and folds in a little whipped cream and a touch of vanilla bean extract. Every bite is like a cloud!

The prepared cannoli shells will keep, unfilled, up to two weeks if stored in an airtight container in a cool, dry place.

Only fill the shells when you’re planning to serve them, otherwise, the ricotta cheese filling will make the cannoli soggy. 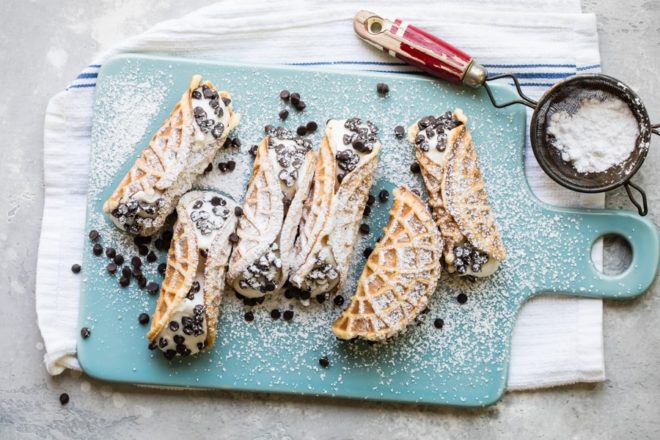 Sprinkle the ends of the cannoli with tiny chocolate chips, chopped pistachios, chocolate shavings, or finely chopped candied orange peel. Finally, give the outside a dusting of powdered sugar, then hurry up and eat them all until there’s not a single cannolo left! 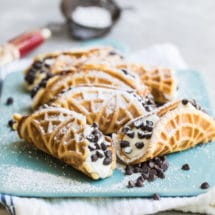 This recipe yields 35 - 40 cannoli, or 2 to 3 per person. The recipe may be halved. Recipe adapted from Alex Guarnaschelli. 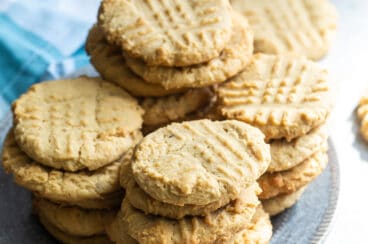 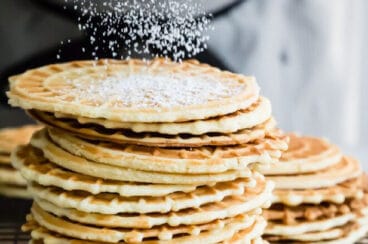 How to Make Royal Icing