Shredded potatoes make a crispy and tasty crust for this easy Hash Brown Quiche. Topped with ham and peppers, it's reminiscent of a delicious Denver Omelet.

The first time I had Hash Brown Quiche was at my Aunt [in-law] Susan's house in Minnesota. I was blown away by how delicious (and almost obvious?) it was.

I mean - OF COURSE hash browns make a great quiche crust, and yes ham and green peppers are the best topping combination ever.

It's kind of like a Denver Omelet on steroids.

Note to self: More things must be topped with ham and green peppers.

I immediately begged her for the recipe.  It's hearty and delicious but not overly fussy: Just tasty food that is easy to make and fun to eat.

No leftover ham? No problem. You can use cubed deli ham (have them slice it 1/4-inch thick) or ham steaks, or sometimes I even find small packages of diced fully cooked ham. You literally just have to open  the package and you're ready to go.

If you hate green peppers, you can leave them out. But, calls the newspapers because this is shocking: My husband, a declared member of the Green Pepper Hater Party, actually liked the green peppers in this hash brown quiche. I know!!! Twilight Zone.

So, wind down your weekend (or make a random delicious brinner!) with this ultra-tasty, super easy, leftover-ham-using shredded-potato Wonder. My favorite sides? Fruit and mini muffins. And mimosas. Even at brinner. ESPECIALLY at brinner. 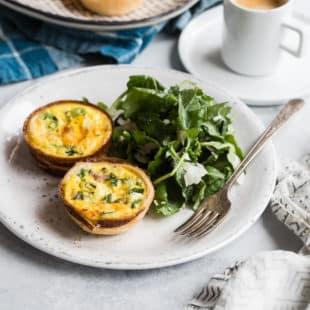