5 from 1 vote
Leave a ReviewJump to Recipe

Put the delivery menu back in the drawer, because you can make this recipe for BBQ Chicken Skillet Pizza tonight, even if you’re in a hurry and need a lightening fast dinner. It’s the perfect combination of sweet, smoky, and cheesy, and it bakes up in under half an hour.

And yes, you can even use chunks of cooked rotisserie chicken or leftover smoked chicken from the weekend, if you’re in a real hurry. And you should be in a hurry…to eat this pizza. Thankfully, it’s a great weeknight dinner to make; using pre-made dough helps get dinner on the table quickly and easily!

Chicken: this can be cooked the night you need it, or you can use leftover chicken from another meal.

Barbecue sauce: perfect instead of traditional pizza sauce–find your favorite.

Shredded cheese: cheddar for a little sharpness, and fontina for soft, melty goodness.

Chives: for a pop of fresh green onion flavor–purely optional.

Ranch dressing: not optional, totally necessary. Cooling ranch is phenomenal-drizzled or dunked. Make your own Homemade Ranch Dressing, or buy your favorite bottle.

If you’re a visual learner, these pictures show you what’s up–but for the actual recipe with specific amounts, look towards the bottom of the page!

All you have to do is grab a big skillet (cast iron works best) and turn the oven on to 500 degrees. You want it hot!

Meanwhile, in another skillet, cook the chicken breast until it’s golden brown.

Roll out the dough (a perfect task for little helpers) and fit it into the pan you’re going to bake the pizza in. It’s okay if the crust comes up the edges of the pan. The skillet will make everything nice and crispy.

Now build the pizza. Your favorite barbecue sauce goes down on the dough first, then chunks of chicken, slices of red onion. Finally cover everything with shredded cheddar and fontina cheese.

Pop it into the oven and bake until the crust is golden brown and the cheese is melted and irresistible.

Then take it out of the oven and scatter chopped chives and drizzle on the ranch dressing. Isn’t it the best thing you’ve ever seen?

What kind of skillet can I use for making pizza at home?

Say what you will about pizza stones, but in case you never considered it, cast iron skillets are fabulous at making pizza. They heat up slowly and pretty much guarantee that the crust stays dry.

Your grandma’s cast iron skillet is begging to be put to use here, so if you have one, dig it out of storage and dust it off.

No matter what skillet you use, just make sure it is oven safe at high temperatures. That basically eliminates all non-stick cookware, by the way, which can’t withstand 500 degree baking.

Next, consider the size of the skillet. If you’re working with a pound of dough, try to use a pan that will hold the dough without crowding it, somewhere between 10-to 14 inches in diameter.

One pound of dough feeds two people generously, so make sure the skillet is large enough for a pizza of that size.

Chances are good that if you make this pizza enough, people will find out about it and invite themselves over for dinner.

If you’ve got a squad to feed and need to double the recipe, that’s easy too. Simply roll out a couple packages of store-bought pizza dough and arrange them on an oiled sheet pan. Build your pizza that way, and save the skillet for more intimate gatherings. It’s still gonna taste great.

Put the delivery menu back in the drawer, because you can make this recipe for BBQ Chicken Skillet Pizza tonight, even if you're in a hurry and need a lightening fast dinner. It’s the perfect combination of sweet, smoky, and cheesy, and it bakes up in under half an hour.
5 from 1 vote
ReviewPrint
Prep Time 20 mins
Cook Time 25 mins
Total Time 45 mins
Servings 4 people
Course Appetizer, Main Course
Cuisine American
Calories 513 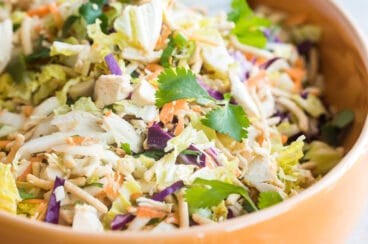 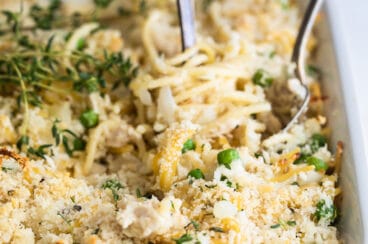 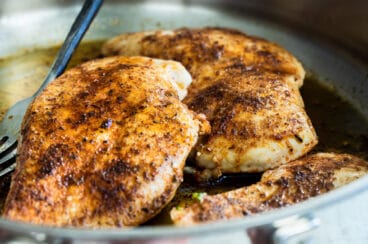 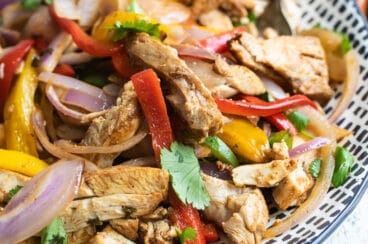