Turn the ramen in your pantry into Baby Bok Choy Salad, a crunchy, good-for-you recipe loaded with vegetables, almonds, toasted noodles, and a killer sesame soy dressing. Faster to make than a bok choy stir fry, this salad is hands-down fantastic for parties or just lunch for the week.

Crunchy stuff in salads make every bite more interesting. For other ramen noodle salad recipes, try Crunchy Broccoli Slaw. Nutty about nuts? Toast some pecans and make Strawberry Spinach Salad. Or roast some walnuts and whip up Israeli Couscous Salad. And don’t forget the homemade salad dressings, like an Asian Salad Dressing that doubles as a marinade, or garlicky Green Goddess that does double duty as a dip. 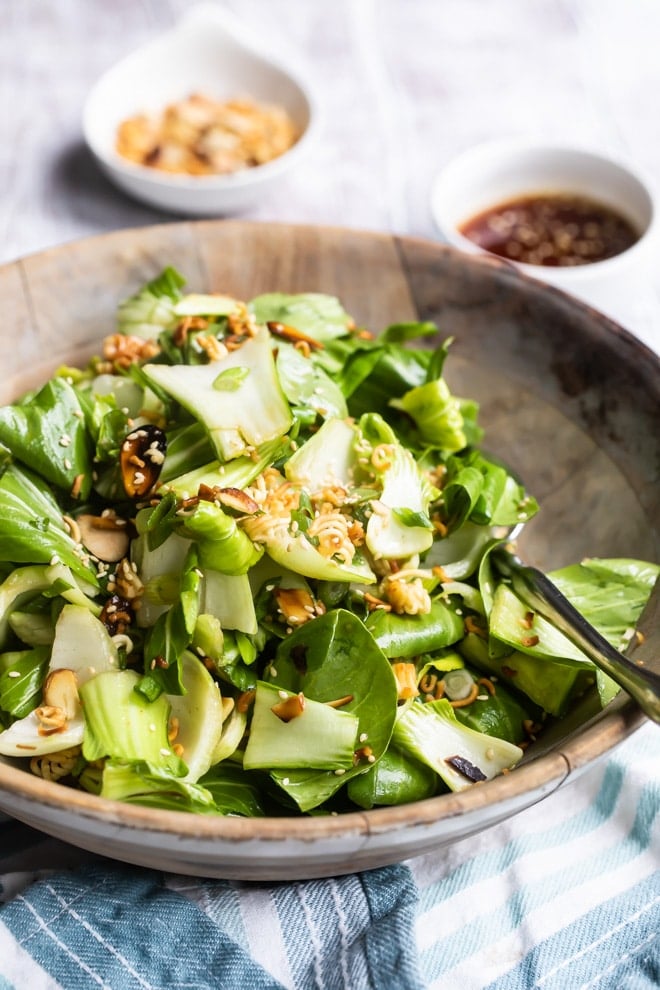 Pin Now To Save! PIN IT
A stellar green salad like this one will be the hit of the party as long as it lasts, so you may want to double or triple it up. It’s big on leafy greens, even bigger on crunchy texture, and absolutely huge on flavor.The great part about bok choy slaw or salad is that it stays crisp longer than any lettuce, so it’s perfect for big gatherings and lots of grazing. It has a mild flavor, too, which highlights any bold, Asian-style vinaigrette. And in case you find yourself overstocked on grocery store ramen noodles, well, this might be the perfect recipe for using them up.

Like all the best recipes, you can add and subtract what you see fit. If you can’t find baby bok choy, use finely chopped cabbage, Napa cabbage, or even a bagged coleslaw mix. The sesame dressing will prevail, bringing all the flavors and textures together!

Making Baby Bok Choy Salad for a spring fling? Just click and slide the number next to “servings” on the recipe card below to adjust the ingredients to match how many you’re feeding—the recipe does the math for you, it’s that easy.

What is bok choy?

Also known as pak choi, pot choi, or Chinese cabbage, Bok Choy is a cruciferous vegetable in the mustard family–just like broccoli, turnips, kale, and cabbage!

Just like its cruciferous family members, the whole plant is edible. You can eat any type of bok choy raw in salads, or cooked, in stir frys.

How to Clean and Store Baby Bok Choy:

The easiest way to clean Baby Bok Choy is to treat it like a bunch of celery. Trim off and discard the end of the bulb and separate the stalks. Then rinse the stalks in cool water, carefully brushing away any sand or dirt on the leaves.

Then use it right away, or wrap in paper towels and store for up to a week in your refrigerator’s crisper drawer.

Slice the stalks in the same manner as you would slice celery, using the entire stalk– including the leaves at the top.

What you need to make bok choy salad:

Don’t worry–there are lots of good substitutions for ingredients in this salad, if you don’t have exactly what the recipe calls for.

For the sesame dressing:

This homemade sesame soy dressing is almost drinkable it’s so good, but if you need a salad NOW, go ahead and use your favorite bottled brand. I’ve heard good things about Kewpie Roasted Sesame dressing, Costco’s Sesame dressing, and Paul Newman’s Sesame Thai dressing. But really, anything with a sesame, soy, or ginger component will taste great.

The homemade dressing can be made in advance and stored in a jar in the refrigerator.

To make the sesame dressing, add the brown sugar, oil (olive oil, or a toasted sesame oil), vinegar, sesame seeds, and soy sauce to a jar with a tight-fitting lid. Close the lid and give the jar a little shake to mix. Keep out at room temperature while making the salad, so the flavors have a chance to blend together.

To make the salad completely gluten-free, switch out the soy sauce for your favorite substitute, such as coconut aminos or GF soy sauce. Then make the salad without the ramen noodles, and be sure to add some extra vegetables! 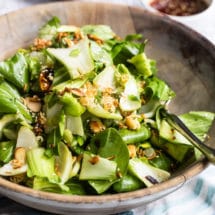 For the sesame dressing:

To make the dressing:

To make the salad: